Please visit http://www.fairtrade.or.ke/news2/videos for more info
Posted by Unknown at 00:04 No comments:

Artisanal and small-scale miners in Africa are making history as they work towards ethical certification.

The challenges faced by the five million artisanal and small-scale miners (ASM) in Africa are particularly acute. There is an exceptionally low level of mechanisation; little health and safety and endemic use of the lethal element mercury in gold processing. In return for these dangers, miners are often underpaid and exploited by local traders.

Most mining laws in Africa, as well as those in Asia and Latin America, are geared towards large-scale industrial mining, thus excluding small-scale mining operations. This leads to informal and illegal set-ups with hazardous conditions. It is a $1 (66p) per day economy, often populated by those with no options left, whose children put their health in danger at the mines: to make extra money for their families or simply because of a lack of childcare.

Now, thanks to a grant from Comic Relief, 900 miners in Kenya, Tanzania and Uganda are working towards Fairtrade certification. It’s hoped that the first Fairtrade African gold will reach the UK this summer. These miners are proving that, with organisation and training, poor working conditions, unfair pay, child labour, women’s rights, health and safety and environmental damage can all begin to be tackled.

If standards can be achieved, the organisations will join Fairtrade. They will also help promote responsible mining practices among the continent’s other ASM gold miners. They will be proof that change is possible.
Egessa Paul, who has been mining since childhood, says of recent developments, “The difference is that we have protective gear - and we have a rock-crushing machine. It takes two hours to crush rocks by hand and just thirty minutes with the machine.”

Fairtrade gold has been available in the UK from pilot schemes in Latin America since 2011. Miners there have reported substantial improvements. The lack of mechanisation In Africa means production levels there are lower. However the training the miners have received means productivity is beginning to increase.
Up to half of the ASM workforce in Africa are women, the highest percentage of any continent. They transport ore, crush and grind the rocks and purify the gold with mercury, often working with young babies on their backs and toddlers at their side.

Mercury poisoning can lead to kidney, sight and speech problems, muscular tremors, seizures and can be fatal. Medical facilities are negligible. Jennifer Nafula, a miner of 10 years, heads a miners’ women’s group and says her main role is to educate the other women on using mercury as safely as they can. Many believe their children are suffering sight defects as a result of mercury vapours and ingesting contaminated water.
“We are grateful that we now know about mercury,” says Naomi Onega, a mother of two. “The next generation won’t have the same exposure. We won’t let children close to mercury-burning. Breast feeding mothers will stay away.” 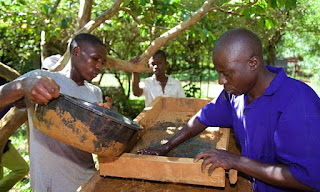 There are many other dangers - pits collapsing, miners drowning in flash floods, children killed in accidents, malnutrition and people swallowing gold to steal from friends. But the miners, together with Fairtrade gold’s Greg Valerio, are optimistic. “If we do it right, and there’s still a lot of work to do, we’ll have the only traceable, legal gold supply chain in Uganda,” Valerio told miners on a recent trip. “What you’ll see here is more than Fairtrade. We are establishing that it is possible to do gold mining transparently. It is no exaggeration that these four groups are making history in Uganda.”

The Fairtrade Foundation is aware that there is a long way to go until Fairtrade gold comes as easily to mind as Fairtrade bananas and coffee. Work is continuing apace. A briefing has just been published to explain the complexities behind the industry and the revised Fairtrade Standards for Gold and Precious Metals which encourage best practice.

And this week the ‘I Do’ campaign has been launched ahead of Valentine’s Day – to encourage 50,000 couples to buy Fairtrade gold rings. There is enthusiasm for the idea. The Foundation’s research shows that consumers believe buying jewellery for a special occasion would hold greater value and significance if it carried the FAIRTRADE Mark.

Just like a marriage, Fairtrade is about togetherness. Miner Dan Odiba, from the Micodepro group in Kenya, certainly agrees. “Previously every miner worked on his own,” he says. “Now we mine as a group, process our ore together as a group and sell as a group. Today we are privileged to work collectively.”

The modern kitchen construction for Kiptulus Secondary School is a typical example of how we utilize these funds.

The Fairtrade Marketing Organization Eastern Africa (FMOEA) has organized a two day road trip to the Sireet Outgrowers in Nandi County, Kenya, for the Universities For Fairtrade Brand Ambassadors, slated for 23rd and 24th July 2015. 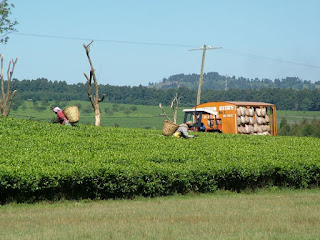 The participants, selected Fairtrade Brand Ambassadors drawn from various universities will learn first-hand, how Fairtrade Premiums works and will mingle with the beneficiaries of these projects.